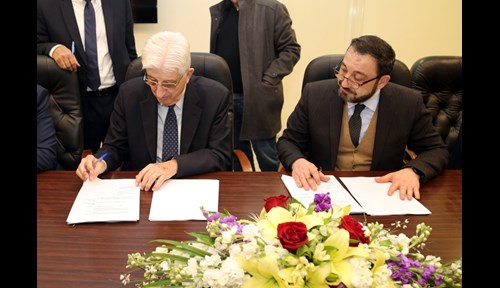 For the First Time in The Arab Region JEPCO and Umniah sign partnership to establish new company operating an over-ground fiber optic network The strategic partnership will provide the infrastructure needed to deliver high-bandwidth internet to 1.4 million homes, businesses and establishments Amman — The Jordan Electric Power Company (JEPCO) and Umniah have signed a partnership, under which a new company will be established to create the infrastructure for a large-scale fiber optic network servicing the areas operated by JEPCO. This will deliver wholesale high-bandwidth internet services to telecom companies and service providers, eventually reaching more than 1.4 million homes and businesses. The agreement was signed by JEPCO Chairman Isam Bdeir and Umniah’s CEO Ziad Shatara in a ceremony attended by a number of board members and senior executives from both companies. The partnership is considered one of the most important between two private sector companies operating in critical sectors in the kingdom, both of whom offer services that are conducive to investment economic growth and impact the daily lives of Jordanians nationwide. Under this partnership, a new company co-owned by JEPCO and Umniah will be established and — once all necessary permits and certifications are acquired — will commence the establishment of a new fiber optic network covering all areas in which JEPCO operates, which in turn will serve subscribers of both companies in addition to offering wholesale services to other service providers. This agreement falls in line with Umniah’s continued efforts to accelerate digital transformation in the kingdom by creating accessible infrastructure and services. The new fiber optic network will help countless communities gain access to reliable broadband internet and to experience the full potential of the modern digital age. JEPCO Chairman Isam Bdeir, who signed the agreement on behalf of the company, highlighted the importance of this partnership with Umniah, which he noted will yield considerable returns to its investors, partners and the overall economy by implementing a forward-thinking business model that integrates the energy and telecommunications sectors. He added that the new company and the planned fiber optic network will revolutionize the delivery, billing and communications operations for JEPCO, thus helping to bring Jordan’s electrical grid into the twenty-first century. Ihab Hinnawi, the CEO of Batelco Group — of which Umniah is a subsidiary — commended the efforts of Umniah to revolutionize the Jordanian telecommunications landscape, and to support the efforts of the government to create a digital economy. He further underscored Batelco Group’s confidence in Jordan’s economic and investment potential, noting that this agreement will help broaden the scope of investments made by Batelco in the kingdom. Meanwhile, Umniah’s CEO Ziad Shatara, who signed the partnership agreement on behalf of the company, expressed his gratitude to JEPCO for choosing Umniah as a partner in this large-scale project. “This partnership is yet another milestone in Umniah’s ever-growing legacy, one of which we are all proud. Our primary objective is to accelerate internet and digital penetration nationwide and to redefine the way Jordanians perceive and interact with technology.” “More importantly, this partnership will help propel the local economy by creating an environment that is conducive to business development and growth. This will help create additional job opportunities, all the while providing existing businesses with the tools and infrastructure needed to expand their operations,” he added. In 2018, Umniah and JEPCO had completed one of the largest infrastructural projects in the kingdom by establishing an over-ground fiber optic network running in parallel to the electrical grids operated by JEPCO. This network aided in connecting and automating a number of power substations and in the installation of smart counters throughout various areas in Amman. Moreover, the network has also allowed JEPCO to remotely manage electrical grids in various areas. The partnership is also facilitating the delivery of cutting-edge internet services to various areas, with more areas set to receive coverage in 2019. Founded in 1938, JEPCO is one of the oldest strategic corporations in Jordan, with shares publicly traded on the Amman Stock Exchange. The company provides services in four municipalities — Amman, Zarqa, Salt and Madaba — with a subscriber base of around 1.4 million people across both corporate and individual sectors. It has acquired ISO certifications for quality control, environmental friendliness, health and worker safety. Umniah was founded in 2005 and is an owned subsidiary of Batelco Group. The operator provides integrated telecommunication services to more than 3.2 million users across Jordan, spanning individual, enterprise and high-speed internet services. Umniah has been ranked the fastest broadband network in the kingdom and continues to lead the industry in terms of digital transformation across all operations. END