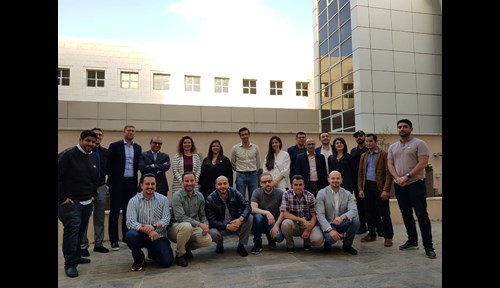 From Bahrain, UAE, Saudi Arabia and Oman Investors, Venture Capitalists, and Accelerators Discuss Future Cooperation with The Tank, Umniah's Entrepreneurship and Innovation Incubator April xx, 2019 – Amman, Jordan: Investors, Venture Capitalists (VCs), and accelerators from across the Arab world congregated at the headquarters of The Tank, Umniah’s business incubator, to discuss future cooperation. Participants were also treated to a tour of The Tank’s facilities and were briefed on the main services, technologies, and programs it provides to Jordanian startups and business entrepreneurs. Investors and VCs from relevant parties in Bahrain, the United Arab Emirates, Saudi Arabia, and the Sultanate of Oman were updated on the workings of the innovation center, which is a pioneering business incubator in the region, and deliberated on the various means available for future cooperation. A delegation from the Economic Development Board (EDB) and representatives from BRINC, a business enhancer, as well as C5 Capital, and Flat 6 Labs for supporting startups in Bahrain, and representatives from the Omani business enhancer OTF Wadi, visited The Tank after participating in the World Economic Forum held last Saturday and Sunday at the Dead Sea. Earlier, representatives from Startup Boot Camp in the UAE, the Saudi Arabian General Investment Authority (SAGIA), the Saudi Technologies Venture (STV), Saudi Investment Venture Capital Company, and Saudi Endeavor discussed means to facilitate access by startup and incubated companies at The Tank to markets. They also spoke of networking opportunities and primary financing for companies, as well as exchange and promotion programs and means of joint cooperation. The visitors attended a detailed presentation about Umniah's The Tank, which was established through royal sponsorship in 2014. They also examined Umniah’s role in supporting business entrepreneurship and Jordanian startups through the guidelines, financial and legal consulting, and business development plans provided by The Tank, as well as how to obtain financing and methods of networking with foreign markets, and tax and customs exemptions for incubated companies. At the event, Umniah CEO Ziad Shatara said that the visits the first of their kind to The Tank, saying, "These visits by Arab delegations reflect the outstanding reputation enjoyed by Umniah and its business incubator in supporting and empowering nascent business sectors, allowing them to reach their full potential. They also reflected on the concerted efforts by Umniah to contribute to achieving sustained development and facilitating Jordan’s transformation into a digital economy." Shatara went on to add, "During the tour, we also discussed means of reinforcing joint cooperation in business entrepreneurship and ways to network and enhance access by business entrepreneurs to Arab, regional and international markets. We hope that this cooperation will continue to serve the interests of all parties." The Tank launched the first virtual incubation program for Jordanian startups in the region, offering a fully-fledged incubation services to 20 startups overall -10 startups virtually- every year, which complement the most prominent international trends such as Blockchain, FinTech, artificial intelligence, eTrade, and others. The Tank is the official sponsor of the Queen Rania National Entrepreneurship Award (QRNEC), and last year participated in the Mobile World Congress (MWC) held in Barcelona, which saw Umniah sponsor the involvement of 10 startups at the YFN4 innovation platform affiliated with the congress.