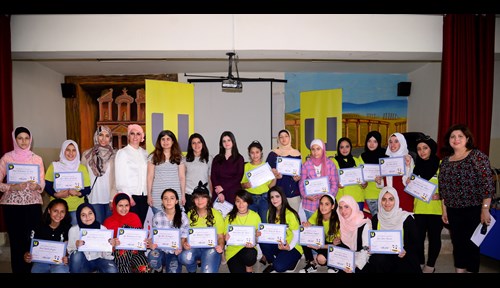 Umniah Celebrates Graduation of First Caravan Razan Class and Welcomes the Second and Third Groups July xx, 2018 – Amman, Jordan: Umniah celebrated the graduation of the first cohort of students from Caravan Razan as part of its continuous support for the Jordanian educational sector, which the company considers the cornerstone in the sustainable development process. The first part of the initiative was carried out in the courtyard of Al-Bnayyat Secondary School for Girls, south of the capital city Amman. Umniah has sponsored the innovative voluntary initiative by Razan Khilfeh in the field of education, instructing students free of charge in underserved areas, by offering a fully equipped caravan to receive students who need additional classes through less traditional methods in English, Arabic, and Mathematics. Umniah also named Caravan Razan founder, Razan Khilfeh as its Education Ambassador. Speaking at the graduation, Umniah CEO, Ziad Shatara said, "We are proud of the achievements made by the outstanding initiative by Razan Khilfeh with support from Umniah, providing the opportunity for less fortunate students to secure special education opportunities." He also noted that Khilfeh’s project has all the elements of entrepreneurship, from the innovative idea to the scope of achievement in improving student performance. Shatara went on to add, "Umniah has always been a strong supporter of the Jordanian education sector due to its importance in advancing nations." He said that the company is always on the lookout for quality initiatives that are compatible with its corporate social responsibility strategy, that is exemplified by the slogan of "Belong." Umniah also works within the communities in which it operates to enhance the communication channels with its strategic partners. At the ceremony, Umniah’s Education Ambassador Razan Khilfeh applauded Umniah's continued support, which she received from the establishment of her project, saying: "Umniah’s support and sponsorship was pivotal to my initiative; without it, I would not have been able to achieve my childhood dream." She went on to explain that the idea began as a simple one, which was to teach less fortunate children in very small groups on the sidewalks of the Al-Bnayyat area. Khilfeh added: "Since its launch, the caravan has reached 200 girls, and is now hosting three groups of male and female children. We have also increased the number of volunteers in order to provide wider services to more beneficiaries." She added: "With the continued support from Umniah, I hope to expand the caravan’s work. I am deeply grateful to Umniah, which has become part of me and my model in my life, and to which I belong." At the graduation ceremony, entrepreneur Lana Al-Kattan gave a talk about bullying, while a seminar was presented by entrepreneur Rawan Barakat, who is founder and director of the Ranin Foundation, another initiative supported by Umniah. At the end of the celebrations, certificates were handed to Caravan Razan first graduates. -END-