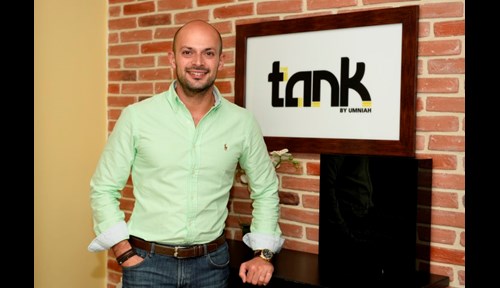 Ammar Mismar from Umniah wins the Second Prize in “Dr. Ahmad Al-Hourani Award for Excellence” October 23, 2018 – Amman, Jordan: Umniah’s Entrepreneurship and Innovation Specialist and head of The Tank, Ammar Mismar has won second place in “Dr. Ahmad Al-Hourani Award for Excellence”, which is organized by the Al-Ahliyya Amman University. The university organized the competition for the first time in Jordan in order to commemorate the legacy of the institution’s founder the late Dr. Ahmad Al-Hourani, who was a staunch advocator of education in the country. Umniah, a sponsor of the event, was also one of 100 organizations nominated for the award, which included candidates from ten sectors. Mismar was nominated by Umniah due to his outstanding role and contributions in the field of entrepreneurship and innovation, particularly as his role as head of The Tank. Organizations were invited to nominate their top employee for each category, with awards distributed during a ceremony at the university’s arena on October 19, 2018. Umniah also saw its Director of Communications Wajeeha Al-Husseini selected to serve on the panel of judges, which was headed by the Chairman of Al-Ahliyya Amman University Dr. Maher Al-Hourani. Speaking about Mismar’s win; Umniah CEO Ziad Shatara expressed his pleasure, saying that the award highlights the ideals that Mismar embodies as well as the value he adds to the company that is a pioneer in its field. Shatara said that Umniah’s sponsorship of “Dr. Ahmad Al-Hourani Award for Excellence” underscores its commitment to providing a positive working environment and imbuing a spirit of cooperation, teamwork and participation among its employees. This not only reflects positively on the company's performance and work in the local market, but also on employees, who in turn show pride in their work, undertake their responsibilities with vigor and feel the appreciation of the company’s management for all their positive contributions. Shatara went on to praise Mismar, who, through his stellar performance, is considered one of the company’s most outstanding and qualified employees. Mismar is renowned for his skill set as well as his role in instilling team spirit at the Entrepreneurship and Innovation Department, a vital subdivision of Umniah. He went on to express his best wishes to all Umniah team members in all their endeavors at the company. Mismar spoke of his appreciation for the nomination, which came through the CEO and Umniah’s team members, for this prestigious Jordanian award, going on to highlight the achievements of his team at Umniah. He added that the nomination comes in recognition of himself as well as the entire company, of which he is an active contributing member. The award saw significant participation from a number of companies of varying sectors in Jordan. Prior to the award, The Tank held a workshop at its premises at the Al-Ahliyya Amman University for nominees, who were coached in ideal presentation methods in preparation for the awards - End-