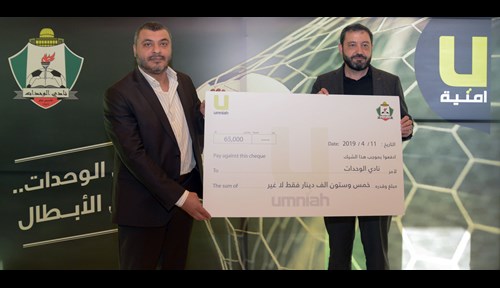 JD65,000 Revenues for Al-Wehdat Club Umniah Offers Al-Wehdat Sports Club Fans the Chance to Support their Team through the ‘”Al Mared Al Akhdar Smart” April 11, 2019 – Amman, Jordan: Umniah, through its strategic partnership with Al-Wehdat Sports Club, offered the club's fans and followers the chance to accumulate JD65,000 from the revenues of its dedicated ‘Al Mared Al Akhdar Smart’. Umniah signed a strategic agreement with Al-Wehdat Sports Club at the end of 2017, and now provides club members and fans with the Al-Wehdat 7 Smart line, Al-Wehdat 12 Smart line, and Al-Wehdat 5 Smart line, with a portion of the revenues from the sales of these packages going to support the athletic club and its efforts in the sports sector. At a press conference held on the occasion, Umniah CEO Ziad Shatara presented Al-Wehdat Sports Club President Yusuf Al-Sugur with a check for JD65,000. The strategic cooperation between Umniah and Al-Wehdat Sports Club is directly in line with Umniah's strategy to offer its continuous support to sports and the country’s youth. Speaking at the press conference, Shatara said, "Today we highlight the outstanding results of our partnership with the Al-Wehdat Sports Club, as well as the company’s efforts, through its innovative products and services, to positively contribute to supporting the club’s activities. We look forward to continuing this productive cooperation in future." Shatara went on to add that he values Al-Wehdat Sports Club’s positive effect on sports in the country, particularly in football, through which the club enjoys a wide and hugely popular base. Also at the press conference, Al-Sugur said that he considers the club’s partnership with Umniah a positive example of the private sector's role in supporting Jordanian sports. Al-Sugur went on to say that he hopes that the club’s partnership with Umniah will widen in scope to the benefit of both organizations. He added that Umniah is a pioneering company and a model for the private sector in social contributions, offering the best business solutions and outstanding products. Umniah's range of packages provide Al-Wehdat Sports Club's fans and followers with an opportunity to receive outstanding offers both through Umniah's network or local and international calls, as well as text messaging and high-quality Internet services. They also offer the opportunity to support the club and its activities, with a portion of the revenues advancing the club’s efforts in the field of Jordanian sports. - End-