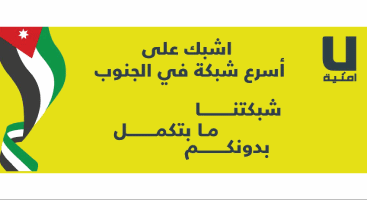 March 23, 2022 – Amman, Jordan: Umniah kicked off a promotional convoy of its products and services for residents of Jordan’s southern governorates, after the successful expansion of its network in the area.

In November 2021, Umniah announced the completion of its southern expansion plan, which included the addition of new towers and upgrading the operation of its 3G and 4G networks in the cities of Madaba, Karak, Ma’an, Aqaba and Tafileh. Through this latest expansion, Umniah now offers subscribers the most innovative technological advancements available, as well as an enhanced user experience by offering better call quality, faster data, smoother transition between voice and data, better coverage and greater overall network stability, all at competitive rates

Umniah Chief Commercial Officer Zaid Al-Ibrahim spoke of Umniah's unrelenting efforts to continue developing and upgrading its infrastructure in order to deliver high-quality and value-added telecommunications and Internet services to its customers nation-wide.

During its tour, Umniah’s convoy launched special promotions, services and solutions exclusive to subscribers from the southern governorates.