Abu Ghosh Wins the Gold Medal for Taekwondo in Britain 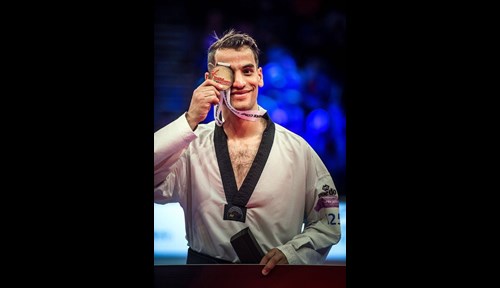 Umniah Ambassador of Sports and Youth Abu Ghosh Wins the Gold Medal for Taekwondo in Britain October xx, 2017 – Amman, Jordan: Umniah Ambassador of Sports and Youth Ahmad Abu Ghosh has succeeded once again marking another achievement for Jordan after winning the G4 Grand Prize in Taekwondo recently held in Britain. The G4 Grand Prize is considered one of the most important international tournaments, and only permits the first 32 players from each weight category to participate, creating a heightened sense of competition that results in improved international and Olympic standings. The gold-medal winner receives 40 points directly, in addition to a purse of $5,000. Abu Ghosh participated in four solid competitions in the under 68-kilogram category, winning the first round against Russian player Constantine Lunin, scoring a golden point, and winning the second round against Iranian player Abu Al-Fadl with an 18-14 score. In the semi-finals, he won against the Olympic player the Russian Aleksey Denisenko, scoring a golden point, winning the championship and achieving his final victory against the British player Sydney Bradley scoring a golden point. Commenting on Abu Ghosh’s victory, Umniah CEO Ziad Shatara expressed the company’s pride in the triumph of the Jordanian hero, who achieved this honor for Jordan and upheld the name of his country in international circles. He affirmed the company's continued support of the Olympian, who has become a role model to many ambitious young Jordanians. Shatara added that supporting Abu Ghosh is part of Umniah’s social strategy, which aims to support young and outstanding talents who have a positive effect on Jordanian society. Last year, Umniah announced the selection of Olympic hero Ahmad Abu Ghosh as its ambassador of sports and youth, and signed a partnership and sponsorship contract with both him and his trainer Faris Al-Assaf. Shatara congratulated Abu Ghosh, and expressed his hope in the Olympian’s continued achievements in his preferred sport. Faris Al-Assaf, Abu Ghosh’s trainer, spoke of the continued support extended by Umniah, saying: "I am thrilled with Abu Ghosh’s achievements through the partnership and sponsorship contract with Umniah, which contributes to motivating talented people to develop their capacities and increase the level of their competitiveness." Abu Ghosh won the silver medal this year in the first round of the Grand Prize tournament in Al-Fujayra, the bronze medal in the Universities Olympiad in Taiwan, the gold medal in the G1 championship in Palestine, and the gold medal in the third Grand Prize championship in London. Abu Ghosh is currently preparing to participate in the last championship of the Grand Prize in the Ivory Coast, where the gold medal winner will earn 80 points. -End-