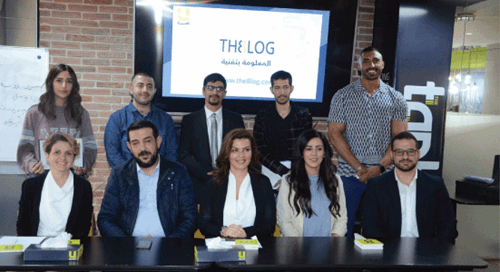 Amman 30 March: Umniah’s The 8Log celebrated the winners of its third Arabic writing competition for university students, during an award ceremony held at Umniah’s business incubator, The Tank.

The competition had welcomed participation by students from nine Jordanian universities, focusing on the topics of technology, cyber security, entertainment, health, sports, travel, art and culture, career advice, as well as entrepreneurship. Many notable submissions pushed the boundaries for creativity and linguistic flair, giving the judging panel plenty to consider during deliberations.

Submissions were judged using a broad range of criteria, including the use of concise and clear language, the presentation of new and interesting information, SEO optimization, among others.

While only five contenders had made it to the semi-final round of the competition, a total of ten students were nominated to attend a skill-building workshop facilitated by Anwan — an affiliate of The Tank.

Following the announcement, Umniah CEO Ziad Shatara emphasized the importance of “The 8Log” as the first platform of its kind to be spearheaded by the Jordanian ICT sector. The platform was conceived with the central objective of fostering and promoting Arabic content online — an objective towards which it has made significant progress since its launch in February 2019.

The platform’s slogan — "Information with Technology" — encompasses Umniah’s vision for “The 8Log” as an engaging source for technical knowledge presented in Arabic and as part of a curated, reader-centric approach. The platform aims to further empower Jordanian youth by cultivating a community of writers, readers, and intellectuals seeking to broaden their horizons.