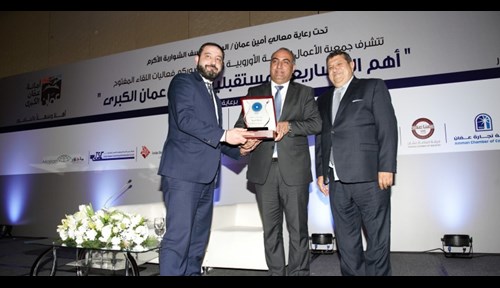 February 14, 2018 – Amman, Jordan: In its continued efforts to support activities that stimulate the Jordanian economy, and as part of its belief in the role that communications companies play in developing infrastructure in order to provide an attractive investment environment, Umniah, a subsidiary of Bahraini Batelco Group, sponsored an open forum organized by the Jordan Europe Business Association (JEBA). The forum, which was under the patronage of Mayor of Amman Dr. Yousef Shawarbeh, was entitled "Main Future Projects of the Greater Amman Municipality" and was held at the Four Seasons Hotel Amman. During his remarks, Dr. Shawarbeh presented the plans for a number of developmental and service projects that the municipality intends to implement throughout 2018, with an eye on the constant forward progression of the capital city, Amman. Also, in attendance at the forum was Umniah CEO Ziad Shatara, as well as a number of the company’s executive team, ambassadors from nations within the European Union, commercial attaches representing their embassies, government officials, and representatives from the private sector and JEBA members. Speaking at the forum, Shatara said, "At Umniah, we are always proud to lend our support to outstanding activities, and this forum in particular, in which the objectives and ambitions of the Greater Amman Municipality (GAM) in sustainable development align with our own." He expressed his appreciation for the concerted efforts by GAM officials and staff to advance the municipality's infrastructure. Shatara added, "Our sponsorship of this forum stems from the importance of familiarizing ourselves with the municipality's procedures and future projects in view of the urban expansion Amman is witnessing. Projects such as the ones that GAM is proposing help encourage the investment environment, which represents a quantum leap in services provided for both corporations and citizens alike." - End-