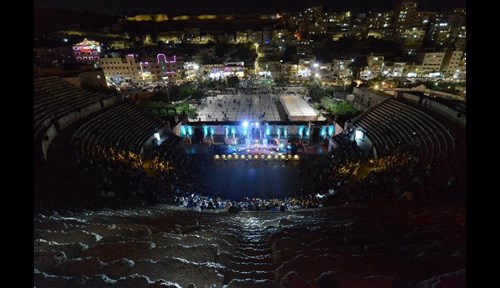 Umniah sponsors Al Balad Theatre Music Festival Amman, July 3rd, 2019 Umniah sponsored Al Balad Music Festival in its sixth edition as part of its strategic partnership with Al Balad Theatre, which took place from June 25th to 29th on the Roman Amphitheater stage and the Odeon Amphitheater in downtown Amman. The five-day festival included 50 performances, comprising of a number of local artists and bands such as Al-Murabba, Yazan Sarairah and Gha’em Juz’i, as well as various Arab bands such as the Palestinian Trio Joubran, the Egyptian HOH team and the artist De Jam from Algeria. Other musical performances encompassed a range of artists from different countries and cultures, including the performance of Palestinian musician Faraj Sulaiman as well as the Harmony project, which brought together the Lebanese singer Tania Saleh with Swedish Lina, and the Constantinople band performances. Tunisian artist Ghalia Ben Ali and Canadian Kia Tabassian further performed on the Roman amphitheater stage their project: "In the footsteps of the Roumi". Umniah has partnered with Al Balad Theater since 2015, sponsoring various events such as the Al Balad Music Festival, Baladak Street Art Festival and other activities of this initiative. Umniah CEO, Ziad Shatara, praised the efforts exerted by the Al Balad Theatre organizers in supporting local and regional artistic bands, pointing out that these efforts are in line with Umniah’s plans to enhance their contribution in supporting the Jordanian cultural and artistic landscape both regionally and globally. Shatara further stated: "We have always been proud of our long-standing strategic partnership with Al Balad Theatre. We are very pleased with our contribution to the success of Al Balad Music Festival, which has always attracted unprecedented public interest." He stressed the importance of the festival in promoting Jordan's cultural and artistic heritage in demonstrating their talent to thousands of fans. “We appreciate Umniah's continuous support of arts and culture in Jordan, especially its support for the activities of the Al Balad Music Festival in its previous editions, which helped the Festival to support the local and regional artistic bands, enhance engagement with the public, and increase the number of artists," said Raed Asfour, Al Balad Theatre Director. He further emphasized the importance of the renewed partnership between them as active cultural institutions and with Umniah. According to Umniah's Corporate Social Responsibility strategy, art is an essential building block for sustainable development. It works as a unified force that takes people beyond social and cultural barriers; hence the company continuously seeks to harness the power of arts to promote creativity, independent thinking, and freedom of expression. Al Balad Music Festival aims to develop new horizons to support Jordanian and Arab young artists and musicians by presenting their works in musical performances to producers from different European countries, to learn about the experiences of these artists. END