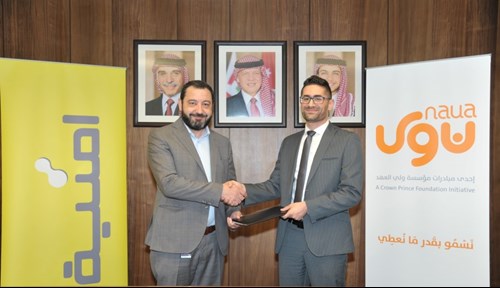 May 28, 2018 – Amman, Jordan: Umniah has announced its strategic partnership agreement with Naua, a Crown Prince Foundation Initiative established in partnership with the private sector. The initiative, which aims to create a culture of giving in society by connecting charitable individuals and institutions in the Kingdom, was conceived to facilitate the process of donation and voluntary work through Naua’s advanced electronic platform. The agreement, which was signed on behalf of Umniah by CEO Ziad Shatara, and on behalf of Naua by CEO Ahmad El-Zubi, also saw the attendance of the Crown Prince Foundation’s CEO Dr. Tamam Mango, Naua’s vice chairman of the board of directors Saad Mouasher, as well as a number of officials from both institutions. The agreement will see Umniah’s commitment to donating through the platform, as well as monitoring projects implemented by affiliate foundations and institutions. Umniah has also committed to initiating and fully sponsoring activities and projects that advance society and spread the culture of giving and social responsibility. The agreement also sees Umniah’s sponsorship of the costs and operational expenses of Naua’s electronic platform. Speaking about the partnership, Umniah CEO Ziad Shatara said, "Umniah is proud of its exceptional partnership with Naua, which is the first national electronic platform that institutionalizes voluntary and charity work by connecting and creating communication channels between the private sector and charitable institutions. Through the Naua initiative, donations to projects can be made easily and efficiently through the platform." Shatara added, "This agreement characterizes the values and principles that guide Umniah, clearly visible in the contributions it makes to bring about quality changes in the lives of the marginalized and those less fortunate. This will lead to the achievement of sustainable and comprehensive development, helping the country move forth to a more advanced digital economy." Speaking at the signing, Naua’s CEO Ahmad El-Zubi praised Umniah’s role in championing voluntary, charitable and humanitarian work. He added that, through this partnership, Umniah will be able to reinforce its contribution to social empowerment by easily identifying results in order to access more disadvantaged groups and sectors, ensuring that support extends to the largest number of beneficiaries. El-Zubi went on to say, "Through this initiative, Naua seeks to advance charitable works and develop the culture of social responsibility throughout the Kingdom."