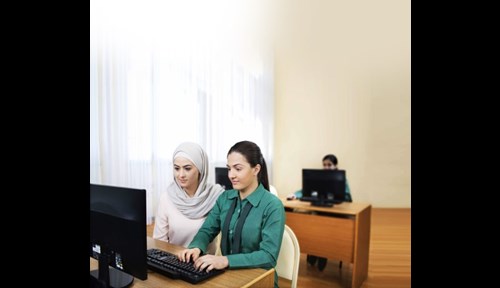 27,000 Tawjihi Students took the First Official Electronic Test in the Kingdom July 17, 2018 – Amman, Jordan: Umniah’s interconnection network, which is part of the largest ICT project in the kingdom between Umniah and the Ministry of Education (MoE), has solidified the ministry's electronic readiness and ability to computerize its exams in the near future. An online pilot electronic exam, as part of the General Secondary Certificate Examination of Education “Tawjihi” students, was implemented with the participation of 27,000 students, who sat for the exam over a period of three days. Since its launch in 2005, Umniah has been an avid supporter of the Jordanian government and its plans to digitally transform the landscape by adopting and cultivating a number of initiatives and projects. The MPLS network, completed by Umniah to the highest specifications and technologies, comes at the forefront of these projects, with the company seeking to encourage e-learning in order to enriching the learning experience for students. Director of the Queen Rania Al-Abdullah Center for Educational and Informational Technology at the Ministry of Education Engineer Ruba Omari affirmed that the ministry has been seeking to implement an e-learning project to support its efforts in developing the information and communication infrastructure. This, Omari said, will reflect positively on the educational system in general by increasing reliance on modern connection and communication methods, in line with objectives and recommendations of the strategic plan to develop human resources for educational development. She went on to note that this project would not have seen the light was it not for the availability of an advanced and high-quality infrastructure, going on to praise Umniah's efforts and effective role in implementing the ambitious project. Omari added that the school interconnection project, implemented by Umniah’s staff in cooperation with Special Communications Commission (SCC) of the Jordanian Armed Forces, has connected all of the Kingdom’s schools with the education directorates through the Multiprotocol Label Switching System (MPLS) network, which resulted in a quantum leap in the ministry's technological infrastructure and has contributed to increasing efficiency, and recently supported us to trustfully take the decision to conduct an electronic pilot exam for “Tawjihi” students for the first time in Jordan’s history Speaking about the initiative, Umniah CEO Ziad Shatara said that the project implemented by the company last year confirms Umniah’s pioneering position in the local market. Shatara added that Umniah has worked to propel the march towards digital transformation in a number of sectors, including the educational sector, in a way that helps create an appropriate scholastic environment for the Kingdom's students. Shatara went on to note that the project is characterized by extraordinary moral and technical dimensions for the company, including reinforcing the company’s continued and concerted efforts to support and develop the educational process and empower student. Technically, the initiative further confirms Umniah’s professional expertise and competences, cementing the company at the forefront of the communication and information technology sector.