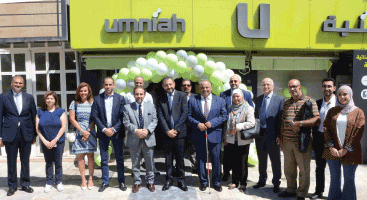 July 3, 2022 – Amman, Jordan: Umniah recently inaugurated its newly redesigned showroom in Jubeiha under the patronage of the President of the Higher Council for the Rights of Persons with Disabilities, His Highness Prince Mired bin Raad bin Zaid, who was accompanied by Umniah CEO Ziad Shatara.

The showroom, which was redesigned to meet all the requirements of access for persons with disabilities, is entirely in line with the company’s corporate social responsibility strategy and its sustainable development goals to help persons with disabilities integrate in their communities, allowing them full access to Umniah’s entire suite of services.

Umniah has pledged to redesign its showrooms around the Kingdom in accordance with the access requirements of people with disabilities, making it the first Jordanian company to use both local and international standards that make them more inclusive.

The company partnered with the Higher Council for the Rights of Persons with Disabilities to upgrade 46 of its showrooms nationwide. To date, six showrooms have been redesigned, including the ones in Gardens Street, Jubeiha, Zarqa Al Bitrawi, University Street in Irbid, Al Shiekh Mall in Aqaba, and Al-Hurriyah Street in South Amman, with work currently underway on 10 other showrooms as part of the project’s second phase, which should be completed before the end of the current year.

The redesign included the installing of ramps with warning stickers, dedicating a space inside the showroom for wheelchair users with guidance stickers on the ground, allocating a special office to communicate with people with disabilities, using special symbol devices for the disabled, as well as floor indicators to guide the visually impaired.

At the opening, President of the Higher Council for the Rights of Persons with Disabilities His Highness Prince Mired bin Raad bin Zaid thanked Umniah for its efforts and its outstanding role in integrating persons with disabilities with their surrounding communities, offering them the best services on an equal basis with others. He went on to express his hopes that all the country’s economic sectors follow Umniah's example in taking innovative strides that support the council's mission of building a society in which persons with disabilities enjoy a dignified life that enables them to participate effectively, based on justice and equality.

Also at the event, Umniah CEO Ziad Shatara spoke of the importance of this project for persons with disabilities in Jordan, who make up approximately 11% of the population, adding that Umniah will implement all the necessary accessibility requirements at its showrooms in accordance with the highest local and international standards.

According to Shatara, the project is in line with an initiative launched by the Global Mobile Telecommunications Union in 2020, which identified three main values to promote the digital inclusion of people with disabilities, including embracing the principle of inclusion for people with disabilities at every level of an organization, understanding how to better reach and serve them and providing products and services that meet their diverse requirements. Shatara said that Umniah has held workshops to qualify its team members to best serve customers with disabilities.

Umniah previously participated in and funded the Hotline for the Deaf (114), which provides a platform for the hearing impaired that allows them to communicate by video, free of charge, using a custom-made application. The company also provided technical, electronic and marketing support, rehabilitation, technical training and awareness, in addition to facilities.