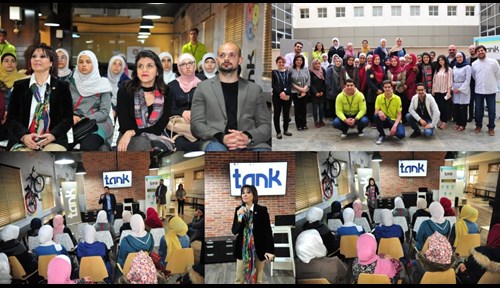 May 2, 2018 – Amman, Jordan: Umniah celebrated International Girls in ICT Day as part of its belief in furthering women’s empowerment and advancing their participation in the workforce. The event, which was held in cooperation with GSMA, saw the participation of Minister of Information and Communications Technology and Minister of Public Sector Development Majd Sheweikeh. To mark the global occasion, Umniah hosted a group of girls from Al-Bnayyat Secondary School for Girls at its entrepreneurship and innovation incubator The Tank, enriching their knowledge about the world of information and communications technology and dispelling any misconceptions they may have about the field. The talk also focused on helping the students develop their thoughts about becoming entrepreneurs in the sector, offering them opportunities to take part of an international campaign supporting women. At the celebration, Sheweikeh said that women make up half the population and should have a fundamental and significant role in society, leading the quantum leap the kingdom is witnessing in the field of information and communications technology, a vital sector full of employment opportunities. She called on girls to be armed with the will and confidence to become involved in the sector, actively pursuing pioneering and creative projects through which they can achieve their ambitions. Commenting on the company’s role in the global event, Umniah CEO Ziad Shatara said, "Umniah is a pioneering company in working to achieve a balance and gender equality in the workplace. The company has set up a number of policies and strategies that aim to achieve equality at work and beyond.” He added that in 2014, Umniah launched its gender work plan, which outlines its strategy to promote equality in salaries, incentives and bonuses, administrative performance policy, in addition to implementing special policies related to gender diversification and equality in the workplace. Shatara went on to add, "Umniah's policies in the field of gender equity are derived from those set forth by the government, which aim to support and empower women in the work force in order to attain sustainable and comprehensive development in the country," highlighting the ample advantages and opportunities for women to enter the field of information and communications. Shatara stressed the importance of women, particularly Jordanian women, in undertaking an effective role in the information and communications sector, which is currently undergoing the fourth industrial revolution with digital economy as its base, and has seen the rise of the Internet of Things, mega-data, smart cities, artificial intelligence, nanotechnology and robots. Also at the event, GSMA Head of Middle East and North Africa Region Jawad Abbassi spoke of the essential role played by Umniah in nurturing creativity among the youth as part of its policy in the field of gender equity and its openness to pioneering ideas. This, said Abbassi, has resulted in the reinforcement of the role played by Jordanian female entrepreneurs and has led to the ideal utilization of their abilities in this vital sector. Abbassi noted that event participants of International Girls ICT Day in Jordan, led by Umniah, share this celebration with 300,000 other girls around the world, and help reinforce the role of females in the ICT sector. Over 150 countries around the world celebrate International Girls in ICT Day on April 26 of every year, an international initiative supported by the International Telecommunications Union (ITU) with the aim of empowering girls and encouraging them to join jobs in the growing information and communications sector.