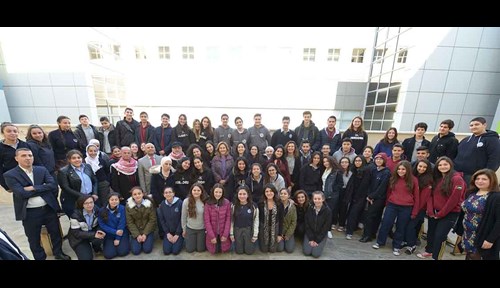 Umniah hosts training workshop for schoolchildren through The Promise Welfare Society (PWS) February xx, 2019 – Amman, Jordan: As part of its ongoing commitment to the community, The Tank, Umniah's entrepreneurship and innovation incubator, hosted a workshop for a group of children in partnership with Promise Welfare Society (PWS) on Emotional Intelligence, Critical Thinking & Innovation. The workshop, which is part of the company’s Umniah Al-Khair campaign, held under the patronage of HRH Princess Alia, the daughter of Tawfiq Al-Tabbaa. This workshop, which was held at The Tank’s headquarters at King Hussein Business Park, complements Umniah's strategic role in supporting the education sector and developing the skills of the youth in order to reinforce and develop innovation and the business entrepreneurship environment in the country. Speaking at the workshop, Umniah’s Communications Director Wajeeha Al-Husseini said, "Umniah works tirelessly to strengthen its support for youth, motivating them to achieve more innovation and creativity by developing and building their abilities and working with them one step at a time to implement their ideas and projects through The Tank. The company is also determined to continue supporting pioneering youth initiatives such as our partnership with the Promise Welfare Society." She expressed her confidence that Umniah's support will have a direct and positive impact on those who contribute to building the Jordan of tomorrow, bolstering its economy in both the medium and long terms. Al-Husseini stressed the importance of workshops, such as the one organized by Umniah for the students of the Promise Welfare Society, explaining that critical thinking helps develop the abilities of children, giving them essential problem-solving skills. Workshops, she added, also open up their minds to different opinions and perspectives, and develops their proficiency in dealing with a wider range of issues as they arise. Also speaking at the event, Promise Welfare Society General Director Azmi Shahin praised the partnership between the PWS and Umniah, which began in 2014 when the company offered four scholarships for university students. Since then, Umniah sponsored regional youth camps for a number of schools last year, in addition to numerous training workshops and other activities. He praised Umniah's pioneering role, through The Tank, in providing support for entrepreneurs that allows their ideas to be transformed into successful companies, thus contributing to achieving sustainable development for Jordan. Shahin also addressed the role of Promise Welfare Society (PWS), headed by HRH Princess Alia, in providing charitable, educational and humanitarian services and supporting those less fortunate. He noted that the society, which was established in 1989, has sponsored 750 Jordanian students, giving them an opportunity to continue their education, advancing their knowledge and contribution to society and building a brighter future for themselves and their families. The Tank’s Entrepreneurship and Innovation Supervisor Ammar Mismar spoke to the 80 students participating in the workshop about Umniah's incubator and its role in supporting entrepreneurship and innovation in the Kingdom. He noted that, since its launch, The Tank has reinforced its position as the most prominent incubator for startups through its outstanding services and programs. Mismar added that The Tank works with about 3,000 entrepreneurs annually, providing them with advanced incubation programs and entrepreneurial assistance, and considers its program as an indispensable part of Umniah's strategy to support the Kingdom's efforts to achieve sustainable and comprehensive development. Ali Al-Hubayshi and Issa Haddad from Smart Choice Training Center (SCTC) spoke about emotional intelligence and the effect of emotions on human behaviors, as well as the fundamentals of emotional intelligence in improving relations with others. Also as part of their presentation, they outlined the strengths and weaknesses of emotional intelligence as well as various ways to improve and develop that skill through the creation of detailed strategies for personal development. The second session of the workshop was presented by entrepreneur Zeina Abu Dalbouh from Umniah's partner Trip to Innovation (TTI), who discussed the concepts of innovation and business entrepreneurship and their roles in achieving sustainable development and enhancing economic activity for any country, reinforcing its competitive capacities at a global level. During the third session, which was entitled Critical Thinking, coach Ruba Haddad presented the concepts, criteria, skills and components of critical thinking, noting that critical thinking contributes to personalities that are more positive, open and adaptable to new ideas and viewpoints. At the end of the workshop, participants had the opportunity to learn about HRH Princess Alia’s vision for the future and her thoughts on emotional intelligence. Princess Alia discussed with the children their outlook for the educational process in Jordan and how to interact with schools through