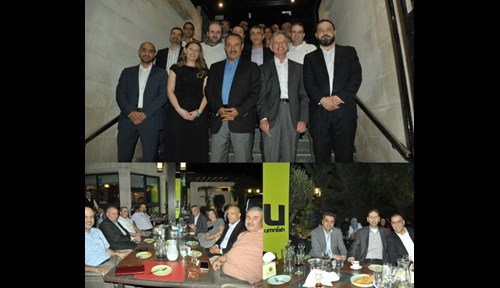 June 11, 2018 – Amman, Jordan: During the holy month of Ramadan, Umniah hosted members of the Telecommunications Regulatory Commission (TRC) at an iftar in order to further strengthen and develop cooperation between the two institutions. The iftar, which was attended by senior Umniah team members as well as TRC Commissioner Dr. Ghazi Al-Jobor, H.E. Dr. Basem Al-Rusan, and TRC executive management officials. Speaking at the event, Umniah CEO Ziad Shatara acknowledged the TRC’s role in developing a healthy regulatory environment that contributes to supporting competition between the country’s telecommunications companies, regulating telecommunications services, protecting the interests of beneficiaries, reducing prices and diversifying the options available to consumers. Shatara also briefed attendees on Umniah’s achievements over the past several years, accomplishments possible due to the attractive and effective regulatory environment created by the TRC, as well as the company’s extensive technical and technological expertise. Shatara went on to add that, since its launch in the local market, Umniah has been driven to build a strong reputation that is complemented by a strict methodology based on the provision of services and cutting-edge telecommunications solutions. The company has also been an avid supporter of entrepreneurship, creativity and competitive offerings, as well as enhancing communication with various institutions and official and non-official bodies. In his remarks at the iftar; Dr. Al-Jobor commended Umniah's outstanding achievements over the years led by its management team and highly efficient staff, contributing to the advancement and growth of the Jordanian telecommunications sector. He extended his wishes for the company’s continued growth and success in the future, which will undoubtedly reflect positively on the national economy.