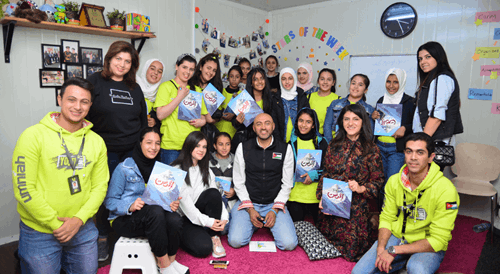 Amman, Jordan, 24 November 2019: Believing in the necessity of supporting the creativity of Jordanian youth in all fields, especially in the field of adventure, as well as encouraging them to pursue their dreams, Umniah has held a publication ceremony for ‘Everest’ book by Jordanian adventurer Mostafa Salameh at Caravan Razan. Umniah also took part in the book’s main publicity event at the Children’s Museum. Everest, the first in a series of seven books dedicated to children and adolescents, highlights the world’s Seven Summits Jordanian adventurer Mostafa Salameh was able to climb. The series, the first of its kind in Arabic, presents comprehensive geographical, scientific and cultural information for the pre-adolescence stage between the ages of 9 and 13, in the form of fun stories about the life of Jordanian adventurer and Palestinian refugee Mostafa Salameh who believed in himself and his abilities and followed his dream to write in gold letters many unique successes and become one of the seven people in the world who climbed all seven summits. The book, published by Jabal Amman Publishers, aims to encourage children and adolescents to pursue their dreams by learning ‘cognitive adventure’, as well as expose them to different cultures from around the world in an attempt to reinforce their understanding as part of the diverse global environment. Umniah Marketing Director, Zaid Ibrahim praised the efforts of adventurer Mostafa Salameh who is considered an example of inspiration and role model for his peers among Jordanian youth, saying that Umniah was the first to sponsor and support the global adventurer. While Salameh represented Umniah at several regional and international events as former Umniah Ambassador for Challenge and Adventure, the company sponsored many of Salameh’s humanitarian activities and initiatives to support cancer patients in Jordan. Ibrahim pointed out that Umniah, as part of its community efforts, provided many platforms to support several unique initiatives, people and creators in all areas of life, stressing Umniah’s desire to inspire young people to challenge their social and economic conditions, and push them to achieve their dreams, as well as encourage them to accept diversity, and ethnic, religious and other differences. For his part, adventurer Mostafa Salameh expressed his appreciation and gratitude for Umniah for hosting the signing of his book ‘Everest’ at Caravan Razan, saying that this continued support helped in highlighting his activities and humanitarian initiatives which have been widely accepted by the public. Salameh, who talked about his journey starting from childhood, said that his life in a refugee camp was the spark that led him to realize his dreams and achievements after overcoming many difficulties and challenges. Umniah Ambassador for Education Razan Khilfeh expressed her happiness in hosting the adventurer Mustafa Salameh at Caravan Razan to meet with the Caravan’s students, noting that this meeting is a real opportunity for girls to get to know a unique Jordanian personality who was able, through his will, determination and passion, to achieve his dream of conquering the Seven Summits. In the end, Salameh talked with the students who are beneficiaries of the Caravan Razan initiative and who attended the event to listen to his inspiring story and learn from him.