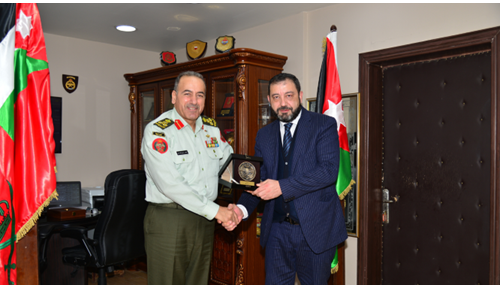 In Honor of Their Memory and Role in Defending Jordan Umniah Donates 150,000 Dinars to Martyrs Fund Over 3 Years Amman, Jordan, 9 February 2020: Umniah delivered the third installment of its donation to the Martyrs’ Families Fund, which amounted to 50,000 dinars, to the Jordan Armed Forces (JAF), bringing the total amount the company has donated so far to 150,000 dinars over a period of 3 years. The company’s third installment to the Martyrs’ Families Fund was made during a visit to the Jordan Armed Forces (JAF) by a delegation of senior Umniah employees, headed by its CEO Ziad Shatara. Umniah CEO Ziad Shatara expressed the company’s great pride in the members of the Jordan Armed Forces- Arab Army and all security forces, pointing out that Umniah’s contribution is in line with its continuous support to the local community, its strong belief in the role of the Jordan Armed Forces- Arab Army in defending the country and preserving its security and stability, and a way for the company to contribute to secure a better future and provide decent lives for the families of martyrs, noting that “this support is a tribute to the martyrs and their sacrifices for our homeland.” Umniah was one of the first Jordanian companies to implement the directives of His Majesty King Abdullah II, by supporting the Martyrs’ Families Fund which was established in 2017 as a homage to the martyrs of the Jordan Armed Forces and other security services who gave their lives defending Jordan’s peace and security, and preserving its sovereignty. -End-