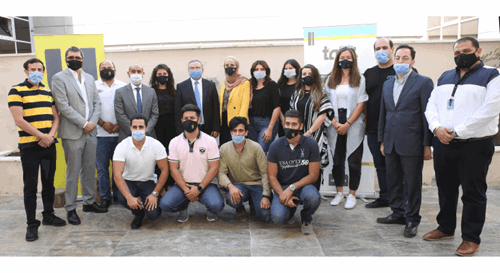 July 27, 2020 – Amman, Jordan: The Tank, Umniah’s entrepreneurship and innovation incubator, recently welcomed Jordan’s Minister of Youth Fares Braizat, who was briefed on the company’s role in the business sector and its work on advancing entrepreneurship in the Kingdom. Braizat’s visit to The Tank was part of a more comprehensive tour the Jordanian minister made on July 20, 2020, to a number of companies based in the King Hussein Business Park.

Braizat was given an overview of The Tank’s vision, activities and the services by Entrepreneurship and Innovation Supervisor Noor Abu Jbara, who also briefed the minister on the businesses incubated at The Tank and their most recent achievements over the last two years.

Braizat is a staunch believer in the importance of empowering Jordanian youth especially with poverty and unemployment on the rise, which will require more concerted efforts in order to provide them with the necessary tools to secure dignified lives.

Also during the visit, Umniah CSR & Innovation Manager, Nicole Shahin spoke about The Tank’s most notable achievements since its launch in 2014, including sponsoring eight start-ups at the Mobile World Congress (MWC) that was held in Barcelona; the launch of the first pre-incubation services and Internet of Things (IoT) program; vocational and technical training; as well as a number of Hackathon competitions, held in cooperation with IBTECAR, which have provided the ideal platform to support creative and innovative youth. Over the past year alone, The Tank has hosted 150 events, both virtual and live.

Shahin went on to add that 37 entrepreneurs and start-ups have been mentored at The Tank over the past two years, while the overall number of beneficiaries from the incubator is over 3000. Incubation services are provided to ten actual start-ups and ten virtual start-ups annually, with The Tank forming three local and international partnerships to support the Kingdom’s business environment and participating in four local and international competitions.

During his tour, Braizat was briefed on The Tank’s incubated businesses, including Ghorkom, Kinda, and Fitely, offering them the chance to partner with the Ministry of Youth on a number of initiatives. He also toured Umniah’s Youth Unit, and was updated on all the company’s youth-centric projects.