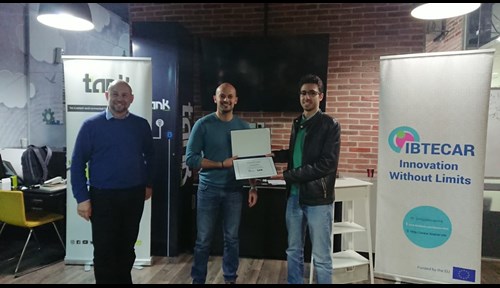 The Tank Announces the Names of Winners in the Third Internet of Things Hackathon December 4, 2018 – Amman, Jordan: The Tank, Umniah's entrepreneurship and innovation incubator, has announced the three winning projects in its third Internet of Things Hackathon, which is part of its drive to encourage innovation and provide opportunities for the country’s youth and business entrepreneurs. The first prize in the competition was won by the Industrial Internet of Things project, a platform that enables existing industrial projects to compete in the fourth industrial revolution, while the Smart Burning Crucible that remotely monitors the burning form using Internet of Things technology won the second place. Third place went to the White Hats Pirate Team, a smart application that connects emergency systems with consumers and establishments through multiple Internet-of-Things systems. The winners were selected from a pool of 12 projects by the panel of judges for their innovative concepts, pioneering ideas and applicability to real-world situations, allowing them to be taken through to the implementation phase. The panel of judges included Dr. Fahd Awwad from the Jordan University of Science and Technology, Dr. Sharaf Bani Mahmoud from the University of Jordan, Jamil Alkhatib from Ibtikar, and Ammar Mismar representing The Tank incubator, in addition to Laith Hammad from the Qatar Center for Technological Innovations, who joined the proceedings remotely. During the two-day Hackathon, which was held jointly by Umniah and Ibtikar, participants develop in-depth understanding of the theory of IoT, and use the mindset of innovation to heighten technological efficiency in the fourth industrial revolution. Participants were also treated to an introduction to an innovation support program that offers team-building activities, work sessions, guidance and mentoring. Umniah Marketing Director Zaid Ibrahim congratulated the winning projects, saying, "The launch of the third Hackathon is a testament to the success of the first two iterations, and firmly demonstrates the depth of Umniah's interest in supporting entrepreneurship and innovation and encouraging and developing the skills of youth in order ultimately allow their successful entry into the job market." Ibrahim affirmed that the Hackathon program is part of Umniah's strategy to maintain its pioneering lead in the market. He explained that the program offers its complete support to this group of people with innovative minds. He noted that this program also contributes to introducing entrepreneurial youth to the latest and most recent international developments in the communications and information technology sector, such as the Internet of Things, a technological revolution that has changed the concept of the Internet since 1999 and that has rapidly expanded as the number of Internet and smartphone users has increased." Umniah launched the IoT lab as the first and only one of its kind in the Middle East. The lab was designed to offer entrepreneurs and innovators technical support in order for them to develop their original technological prototypes, as well as aid them in bringing their ideas to life. The first and second versions of the Hackathon attracted more than 100 male and female developers who competed to develop innovative implementable solutions and ideas in the field of the Internet of Things. - End-