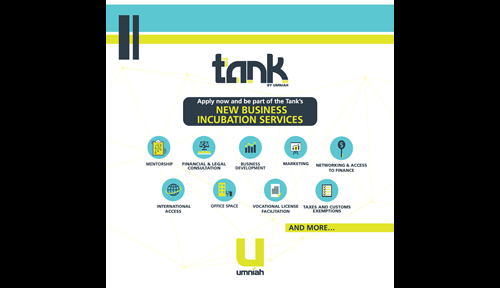 More than 300 Entrepreneurs Apply for Season One of The Tank’s Program August xx, 2018 – Amman, Jordan: The Tank, Umniah’s entrepreneurship and innovation incubator announced that it has begun to review applications submitted by Jordanian entrepreneurs and startups for the new season of its business incubator program for companies. The Tank received over 300 submissions over the course of a month, before closing the application process on August 25, 2018. The Tank is the country’s first full-service business incubator and it is proud of its status as a major motivator of business entrepreneurship and creativity in Jordan. Between 30 and 40 entrepreneurs will be selected to join the program, and they will kick off their training sessions during the second week of September. The courses, which will be held over the course of a few days, will work to prepare the participants for initial presentations, after which a specialized committee will select 15 from among the group of entrepreneurs and startups to move forward, according to pre-set conditions and criteria. A distinguished committee, headed by Umniah CEO Ziad Shatara, will run a half-day session that will showcase the business models of each of the chosen 15 entrepreneurs, after which the committee will select ten to move forward with the program. The committee headed by Shatara will include experts and specialists in the spheres of investment, marketing, finance and creativity, in addition to noted regional women entrepreneurs. Speaking about the upcoming program, Shatara said, “The Tank, which is equipped with highly advanced infrastructure and all the necessary training and support facilities, is set to play an effective role in assisting entrepreneurs and Jordanian startups by providing them with a productive and comfortable environment that motivates creativity and innovation." He went on to explain that since its launch in 2014, Umniah's incubator has made clear achievements in the development of business entrepreneurship in the Kingdom. It has also been pivotal in contributing to the creation of unique opportunities for startups to meet with major local and international companies in order to push their businesses forward. - End-