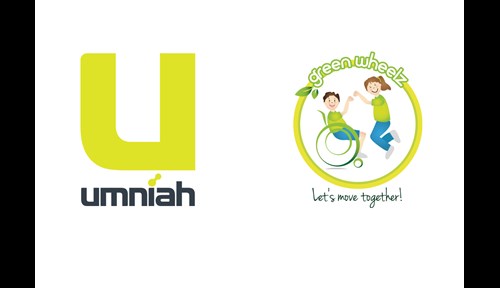 Umniah renews “Green Wheelz” partnership to protect environment and support persons with disabilities in Jordan Amman, February xxxx 2019 Umniah renews its partnership with the "Green Wheelz" initiative for the second year to protect the environment and support persons with disabilities in Jordan. Under an agreement signed between the two sides, Umniah team will collect plastic caps and aluminum cans that are consumed inside the company for the Green Wheelz Initiative. The company’s HR and logistics teams will then transfer the waste to local recycling factories and then donate wheelchairs to support children with Cerebral Palsy in Jordan and support the education and treatment of children at an early age to ensure their health progress, in cooperation with the Cerebral Palsy Society, which benefits the Jordanian society overall. Umniah CEO, Ziad Shatara, stated that he was pleased to continue to partner with the Green Wheelz Initiative, which further highlights Umniah's commitment to promoting a culture of environmental sustainability by mitigating the harmful effects of plastics and aluminum through recycling, as well as increasing awareness of the importance of environmentally friendly practices among the company's employees. Shatara pointed out that solid waste management is one of the most pressing environmental problems facing Jordan as a developing country and poses a real danger to humans, public health, and the animal and plant environment for many years and decades to come. He further praised the efforts of Green Wheelz to protect the environment from negative practices and to collect donations and assistance for persons with disabilities, especially those with Cerebral Palsy. In turn, the Founder and General Manager of the Green Wheelz Initiative, Raeda Sabha and members of the management team, praised the exceptional and unique support provided by Umniah, the pioneer in the Jordanian telecom sector, for the initiative aimed at serving Jordan on four axes: environmental, humanitarian, community and economic. The initiative supports persons with disabilities in Jordan, whose percentage ranges between 11-13% of the community, especially those with Cerebral Palsy, who account 4 out of every 100 people at a growth rate of 1%. Most of them suffer from the scarcity of financial and medical resources, the lack of empowerment programs and social solidarity; something the Green Wheelz initiative is trying to provide for these disadvantaged and marginalized groups. Green Wheelz is a non-profit initiative working under the umbrella of United Hearts Environmental Training that builds on the solidarity of civil society and all sectors to collect some of the solid waste that causes environmental risk if thrown into the environment. The waste is then sent to recycling plants in Jordan to support the local economy and local communities, and protect the environment from the impact of these wastes as well as reducing the burden on landfills. Green Wheelz then provides wheelchair donations to support children with Cerebral Palsy in Jordan and supports the education and treatment of children at an early age for the benefit of Jordanian society as a whole. This initiative also promotes positive education and upbringing of the Jordanian child as well as the refugee child when possible to ensure children’s protection, dignity and ensure basic human rights for this category, in addition to providing educational awareness programs.